The best newspapers in Europe this year come from Luxembourg, the Netherlands and Germany. A total of 164 newspapers from 25 countries took part in the 22nd European Newspaper Award. There were more than 4,000 entries in the competition’s 20 categories. There were particularly many entries in the specially created category on the Corona crisis. Europe’s newspapers report seriously and publish the information in a reader-friendly way.

The quality of online submissions has increased. The jury received 312 projects from 11 countries. There was a significant increase in the number of multimedia and data journalism projects submitted compared to last year. 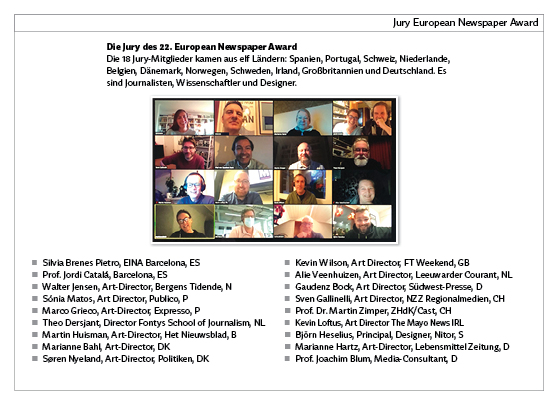 The jury of the 21st European Newspaper Award
The 18 jury members came from eleven countries: Spain, Portugal, Switzerland, the Netherlands, Belgium, Denmark, Norway, Sweden, Ireland, the United Kingdom and Germany. They are journalists, scientists and designers. 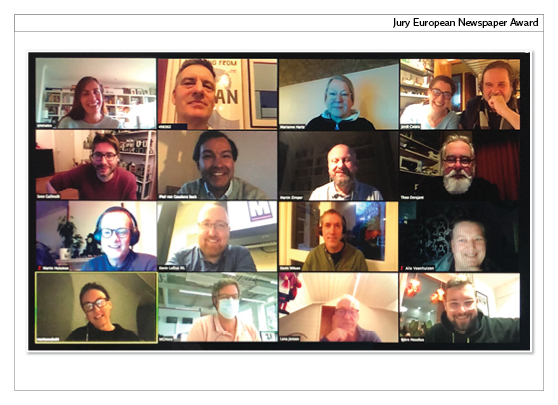 Due to the Corona crisis, the members have been judging at home. The jury works in groups of three, which met for virtual meetings for the evaluation.

The best newspapers in Europe this year come from Luxembourg, the Netherlands and Germany. A total of 164 newspapers from 25 countries took part in the 22nd European Newspaper Award. There were more than 4,000 entries in the competition’s 20 categories.

The jury also received 312 online projects from 11 countries. There was a significant increase in the number of multimedia and data journalism projects submitted compared to last year.

The jury of the 22nd European Newspaper Award
The 18 jury members came from eleven countries: Spain, Portugal, Switzerland, the Netherlands, Belgium, Denmark, Norway, Sweden, Ireland, the United Kingdom and Germany. They are journalists, scientists and designers. The jury consists of external experts such as Prof. Blum, Trier University of Applied Sciences; Prof. Dr. Zimper, Zurich University of the Arts/Cast and Theo Dersjant, Fontys School of Journalism. The jury also includes art directors of newspapers from all over Europe. Many of them have won the main prize „European Newspaper of the Year“ once or several times. The composition of the jury is different every year, as new jury members are constantly being added.

Virtual Congress
Due to the Corona crisis, there will be a virtual congress this year, where the main award winners and trends will be presented. Date: 15 June 2021.

Jury statement:
The name Contacto is well chosen because the Portuguese-speaking community in Luxembourg keeps in touch with its cultural background through this newspaper. In addition to reports from Luxembourg, it covers a wide range of international topics.
The front page is always designed as a poster with the cover story in the centre. Further articles can be presented by smaller headlines. The inside pages often show the contrast of large pictures, which can be followed by pages with long background texts. Very well done are the double-page infographics, which explain the facts about current topics. All in all: a very modern newspaper in the heart of Europe.

About the newspaper:
The weekly newspaper Contacto is produced for Portuguese-speaking citizens in Luxembourg. It has a circulation of 21,000 copies and is produced in tabloid format. The newspaper has five editors, two layouters and seven correspondents. Some of the journalists and designers also work for media in Portugal and international newspapers. 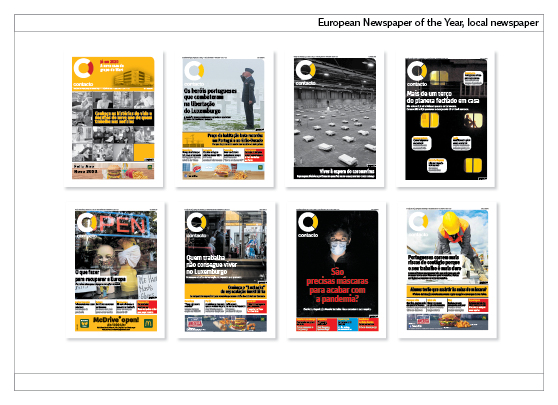 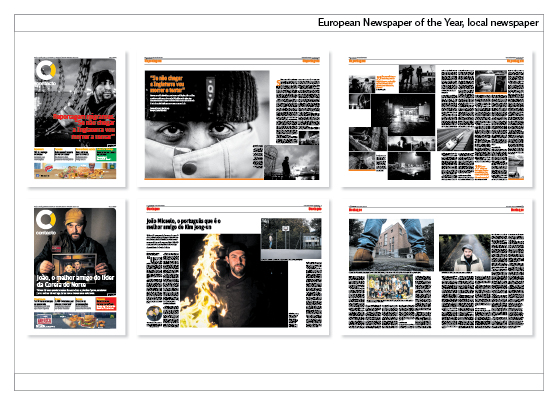 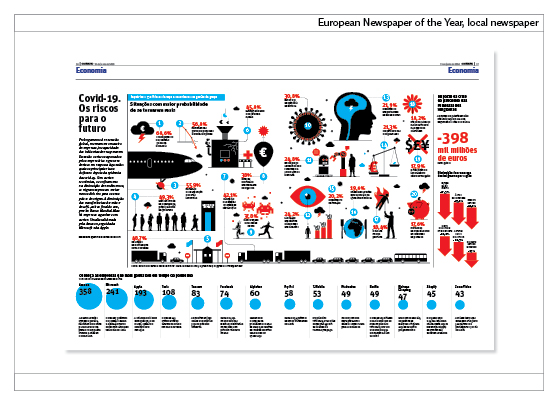 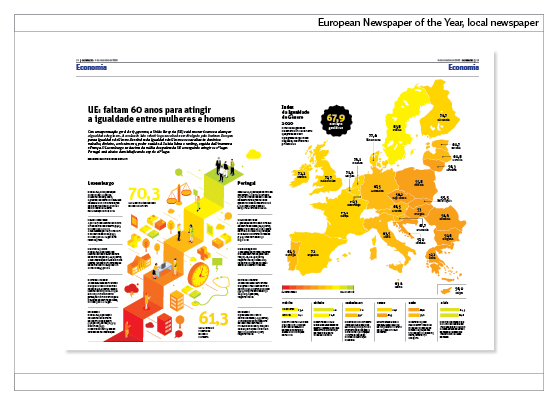 Jury statement:
Het Parool focuses on the Amsterdam region. This is why purely local themes are also present, such as the collapse of a quay wall. This then becomes the cover story. An information graphic shows how such damage could be prevented and what comparable cities are doing. It is an all-round report that not only shows the problem but also the possible solution.
Het Parool also focuses on culture. On Saturdays there are these sections: News, Amsterdam, Sport, Free, Forward, Art, Music, Media, Books, History, Science. On other days of the week the supplement PS is a playground for creative topics.
In addition to a relaxed layout, each article has lovingly designed details: small infographics, fact boxes, quotes and last but not least photos of the authors. All in all: an exemplary regional newspaper that is precisely tailored to its target group.

About the newspaper:
Het Parool is published in Amsterdam in tabloid format. The newspaper is stapled. It has a circulation of approximately 59,000 copies. 60 journalists and six layout specialists work in the editorial department. 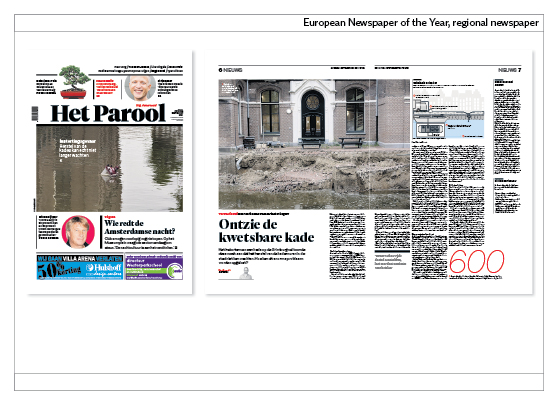 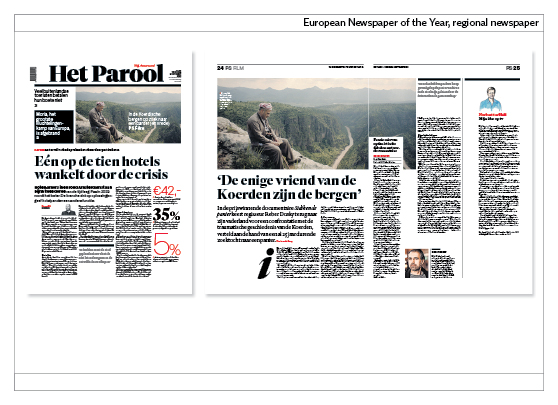 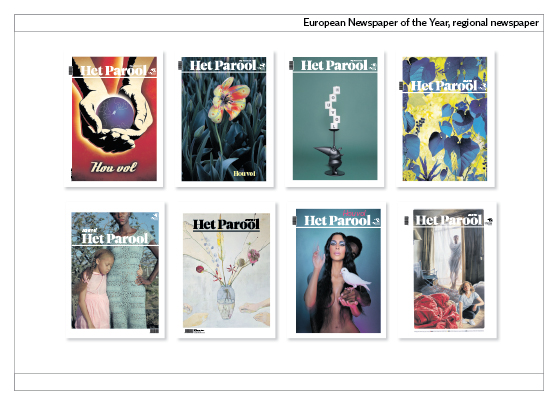 Jury statement:
de Volkskrant focuses on visual journalism, which is consistently used in print and online. The front page visually presents the topics of the day. Inside you will find a magazine layout with a lot of white space.
As with all media, the topics of this newspaper are influenced by the news of the day. But de Volkskrant prefers the creative idea, the different approach to a topic, both in print and online. Often aspects are picked out that other media do not have in this way. For example, nursing staff wearing masks was shown worldwide. At de Volkskrant people are shown without masks to let the faces speak. One has thus found a different approach to the topic.
Congratulations to the great team of journalists, photo-graphers, designers and online specialists who make such an exemplary creative newspaper every day!

About the newspaper:
De Volkskrant is a nationwide newspaper published in Amsterdam. It is printed in tabloid format and has a circulation of approximately 400,000 copies. The newspaper employs 65 journalists, 4 photographers and 12 layouters. 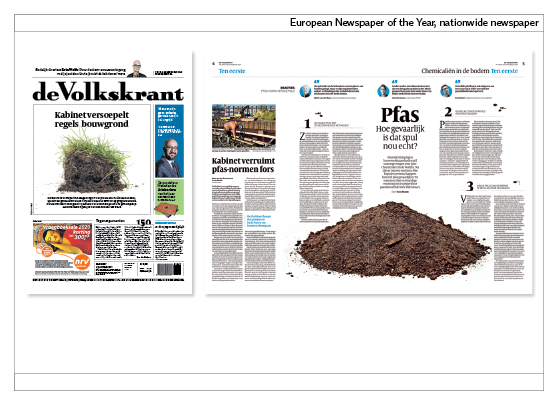 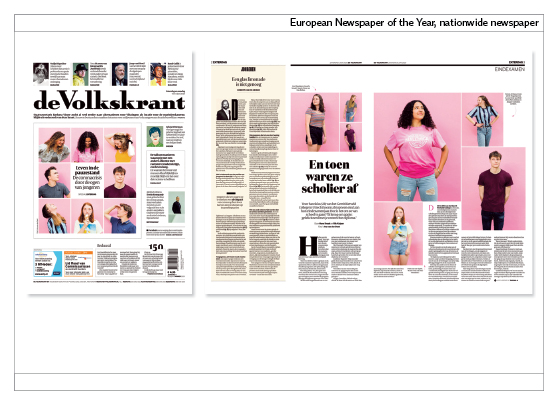 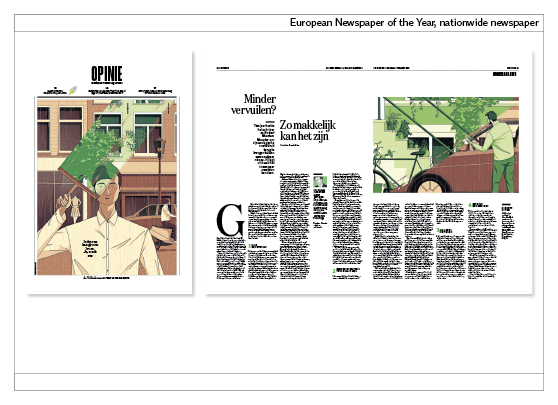 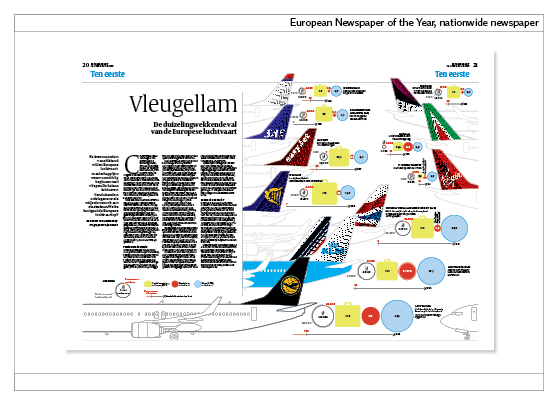 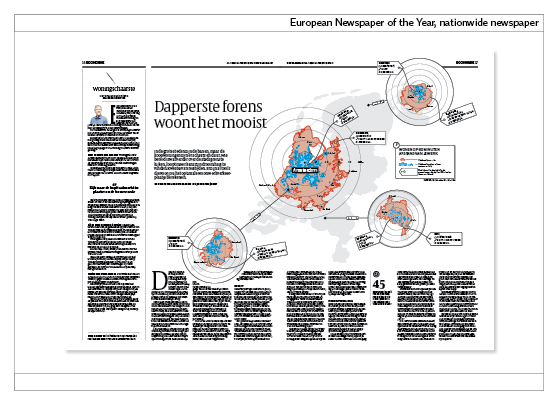 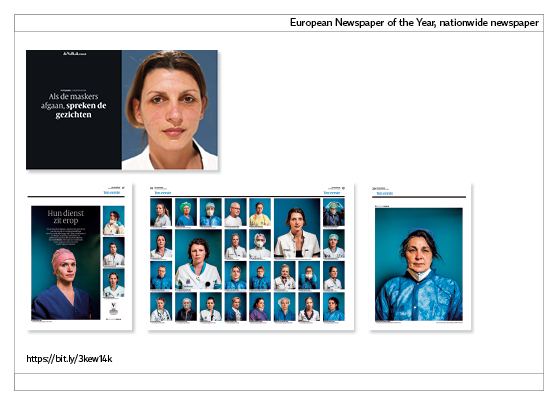 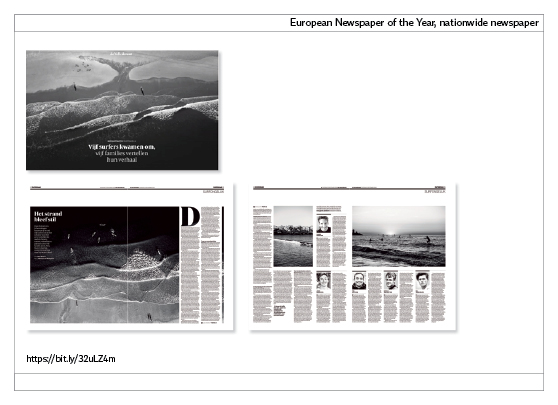 Jury Statement:
Die Zeit has been a great success story for some years now. Within five years, the number of subscribers has increased by 19.75 percent. Reason: The newspaper is constantly being developed in terms of content and design. Many years ago, the front page with its large-scale presentation of the cover story became a model for many newspapers in Europe. New sections like “Streit” – “Controversy” – were introduced.
A full-page infographic is published every week. In the online section there are data journalistic projects.
Despite all the changes and improvements, the design still focuses on continuity and an overall calm layout, where the pictures are the introduction to the respective story.
All in all: Die Zeit is a conceptually and creatively outstanding newspaper. An example of successful renewal at all levels.

About the newspaper:
Die Zeit is published in Nordic format and has a paid circulation of 532,453 copies (IVW 3/2020). The number of subscribers has grown by 13.2 per cent within one year. The newspaper employs 189 editors and 14 layouters. 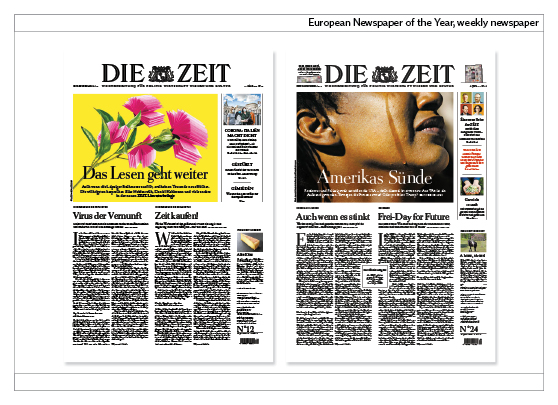 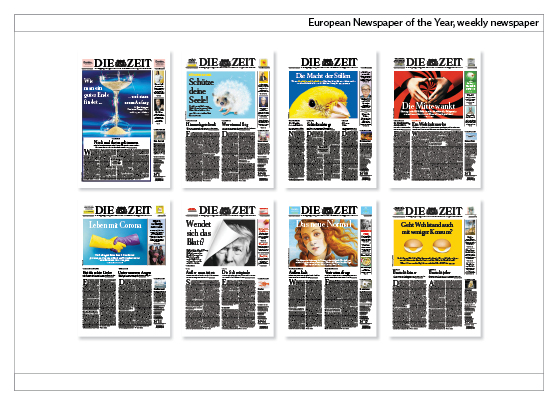 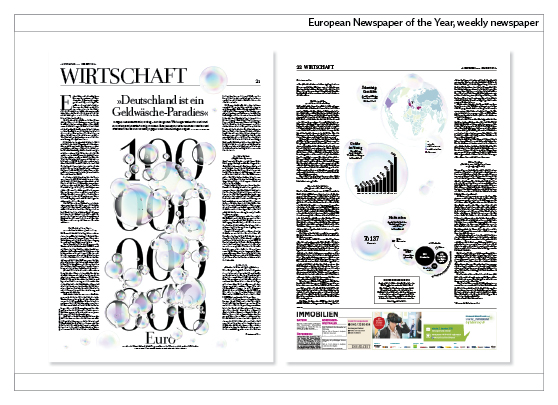 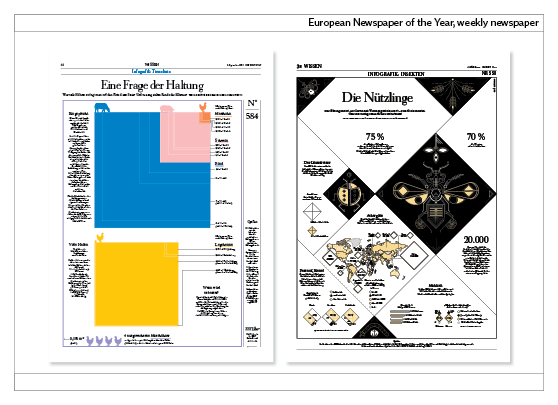